Recently, well-known security researcher Troy Hunt, responsible for the website Have I been pwned? described how someone lost 324000 records with full creditcard details, including security codes, by posting them on a public server. There were two parties suspected of the data breach, but neither could find any breach at first. So both parties stated categorically that there was no breach, all data was 100% encrypted and completely secure on their servers so the problem had to lie elsewere. And they were right, all the data was encrypted.

Now, encrypted data should be safe. And to be honest, encryption is more and more the mainstay of securing your data. Firewalls can be breached, servers and companies infiltrated, but if the data is encrypted it should remain secure even if you publish it on the internet. This is somewhat correct – barring adversaries like national intelligence services, who are very likely to be able to decrypt most schemes at the moment. It’s well known that the Dutch National Intelligence and Security Service (AIVD) is investing heavily in quantum computing research, for instance, which means that the NSA probably has one working right now. But apart from those entities, it’s still quite hard to crack decently encrypted data.

That is why in the new SQL Server edition, SQL Server 2016, it is now possible to keep the data encrypted all the time. Only the client can decrypt the data with their own keys. Barring vulnerabilities in the implementation this is a huge step forward: it is impossible for the database administrators to access data they aren’t allowed to see and the loss of a key only affects data stored for that client. Both are very important steps forward to enable clients to trust databases in the cloud. Which is one reason why Microsoft is pressing forward on this, because they will become entirely dependent on Azure in less than a decade, according to their own predictions. This means that trust in Azure will be a make-or-break issue for the company and their focus on improvements in security reflects this knowledge.

And let me be clear: this is a huge leap forward. The old situation could encrypt some data with server-side keys, but when you made a backup it was decrypted. And in several other scenarios it didn’t work if your data was encrypted. But now it works all over the database, you can set it up quite easily and even choose whether columns are encrypted in a deterministic way that gives the same result every time you encrypt the same value, which enables searching and joining, or random: every time you encrypt the value is different. The latter gives more protection from attackers who encrypt “likely values” and see if they match, which is a classic attack against password-files (see: rainbow tables / dictionary attacks).

In the picture you can see how it works by storing the keys on the client: 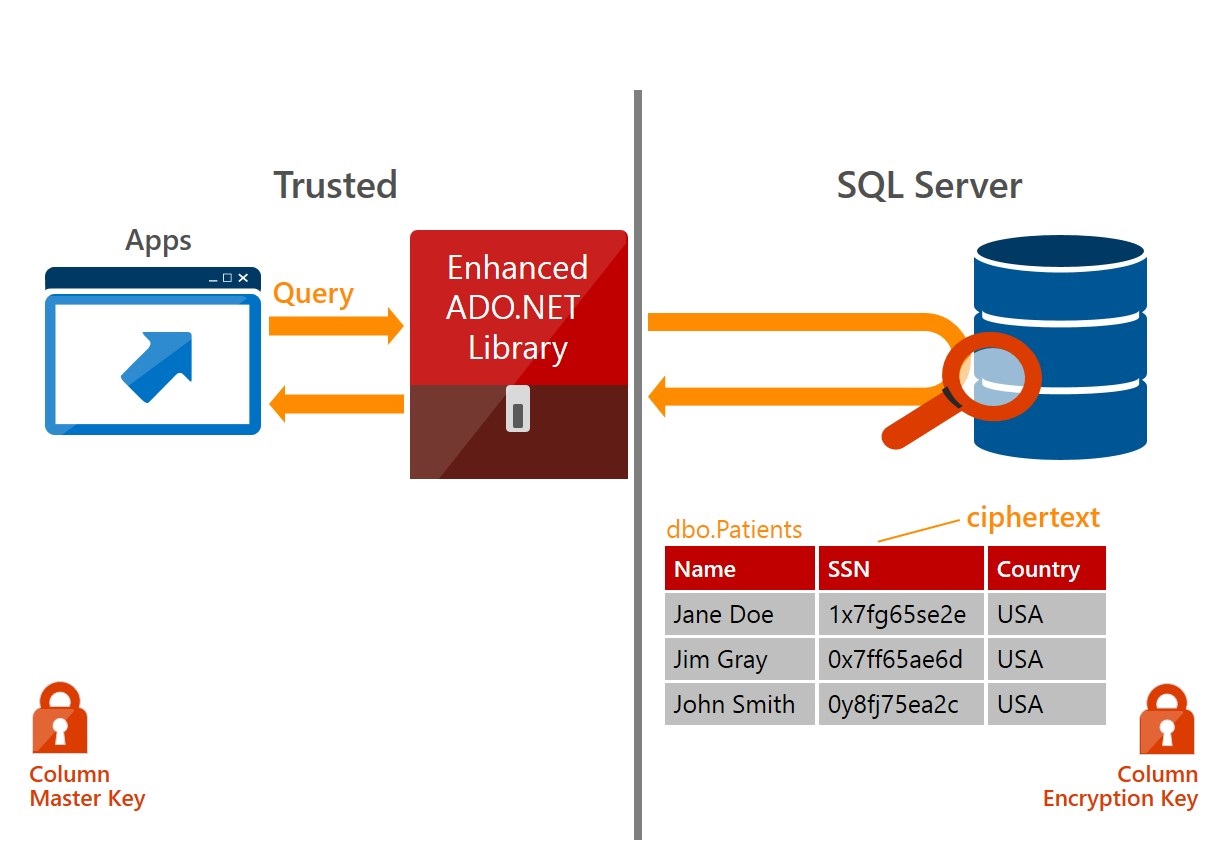 This means we can now store creditcard information and sensitive information in the cloud while not having to rely solely on the goodwill of the Azure database administrator.

There is unfortunately also a downside. The fact that data is now safer does not mean it is safe in all circumstances. The way “always encrypted” works has consequences for your implementation that could blow your encryption scheme right out of the water if misused. So while the temptation to store sensitive but potentially very interesting data because hey, “it’s encrypted” and thus safe, can overcome common sense and even regulations, we should still firmly ignore that temptation.

Because the case I linked in the beginning showed everyone that even if data is encrypted, it is not always safe. In the case which I quoted at the start of the article, the data was encrypted too, and it still leaked. The reason was that the encryption keys were known to the organisation involved and used to decrypt data for analysis. That decrypted textfile was then stored on a publicly accessible server. Encryption cannot mitigate that scenario if the keys are part of the webapplication and the owner of the application can also access the data. Anyone who can get to the keys, can decrypt the information. After that, the security of the data once again depends on what that person does with it – such as putting it on a public server.

This is the reason that if you want to process creditcard information, for instance, you need to be PCI compliant. This is a set of regulations drafted by the financial industry that tell you what data you can store and how. Very sensitive details such as the security code should NEVER be stored. They don’t give security regulations for the storage of the security code: storing it violates all the rules, no matter what you do. The case with Regpack shows that this is still true. What you store will eventually leak, even with encryption. Once quantum computers become available widely, all current encryption schemes are broken and that nicely encrypted data on the internet that wasn’t a problem… is suddenly readable text.

So while “always encrypted” is a step forward, you still need to be very careful about what you store and it still needs to be secure – processing encrypted data on an insecure platform means your data is just as insecure, as the data can be intercepted in memory. While solutions are in the works (Philips, IBM and others are working on homomorphic encryption schemes) this is currently not an option.

My recommendations on this subject are as follows.

Some companies prioritize time-to-market and lower cost over data security. But eventually, those companies will be destroyed over that practice. The current digital environment is just too hostile to survive such practices for very long.